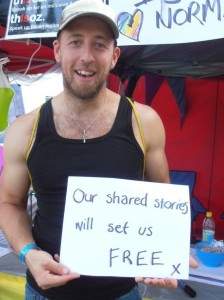 So here in Canada, we just celebrated 10 years of gay marriage being formally recognized, and of course the U.S. has had some significant Supreme Court rulings lately. All of that is fantastic, but there’s still an awful lot of work to be done to give gay, lesbian and transgender folk the same rights that heterosexual men and women enjoy.

I’m really excited to be talking with Daniel Witthaus, who’s been waving a flag for years to help address homophobia. One his of projects is Pride and Prejudice, a six-week program that helps shift students’ understanding of homosexuality. So that’s what our conversation today will be about.

In this interview, Daniel and I discuss:

Listen to my interview with Daniel Witthaus.

0:00:00: Daniel talks about his decision to focus on addressing homophobia in rural areas and places where there are communication gaps on the issue.

0:04:54: Daniel delves into how Pride and Prejudice was formed and why he wanted to take it to an “old boys’ Catholic” region. Michael and Daniel explore the “cuppa tea” approach to conversation – literally sitting down to talk over tea – which helps bring about open conversations and open minds. Daniel explains that every conversation is worth having, and that it will inevitably lead to the next. He also notes that people interact the same way from one group to the next because we’re all “human beings, flesh and blood.”

0:09:58: Daniel discusses his approach in leading Pride and Prejudice, explaining that he doesn’t start by lecturing students on homophobia. Instead, he builds emotional safety, which is essential to bring about open conversation.

0:15:05: Michael asks Daniel to explain how he builds emotional safety, and Daniel explains some of his techniques. He also outlines his approach to staying focused and managing his own emotions when facilitating conversations about sensitive matters.

0:20:16: Daniel touches on his hopes and plans for Pride and Prejudice, as well as other outreach programs. Michael wraps up by directing listeners to other resources on Daniel and his work.

Like a daily dose of inspiration! Get blog posts
delivered directly to your inbox.
Get email updates
Get RSS updates
Twofer Tuesday: Change Your Habits & Do Great Work!!
Great Work Provocation